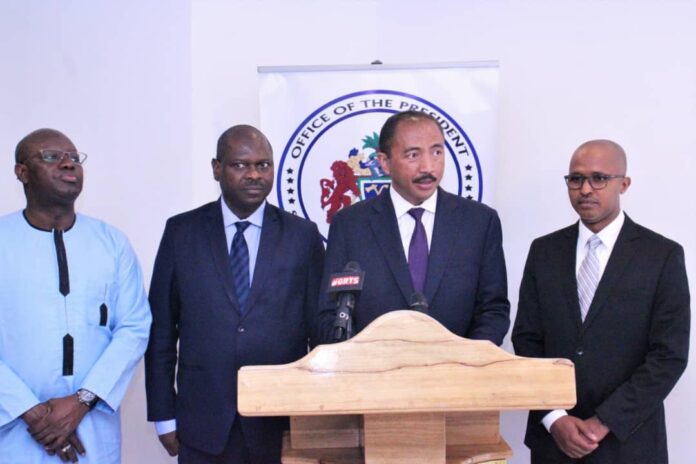 President AdamaBarrow called on IMF to consider in its advisory forconsideration, the difficult economic situation impacting the lives of the poor citizens, as the economy recovers post-COVID-19.

The President made the remarks on Tuesday, 4th October 2022, when the International Monetary Fund Mission Chief, MrIvohasina Fizara Razafimaheta, paid a courtesy call on him at the State House in Banjul.

At the end of a closed-door meeting, the IMF Mission Chief said his team briefed the President on the conclusions of the 5th Review Mission of the Government’s Programme, supported by the IMF under the Extended Credit Facilities arrangements. He added that they discussed the economic developments in the first six months of the year and the Government’s policy direction for the next six to twelve months.

Speaking to the media on inflation, Mr Razarfiahetacontextualised the inflation and price hikes in The Gambia, saying the inflation witnessed by the Gambia is one driven by external factors like the war in Ukraine, which is affecting global fuel and food prices. “Is an inflation being seen in many countries around the world, not only in The Gambia”, He noted. While acknowledging the Government’s efforts to relieve the hardship that higher prices of commodities are inflicting on the population, the IMF Mission Chief said they are advising Government on steps to contain the increase of inflation and the foreign exchange the country is facing. He added that they would consult with the Central Bank of The Gambia on policy options to address the economic situation.

Despite the floods that marred this year’s rainy season and the weak performance, the IMF Mission Chief’s assessment of the Gambian economy activities found that, even though tourist arrivals have not yet reached pre-pandemic levels, there are an increasing number of tourists arriving, a thriving construction industry, and an anticipated bumper harvest in 2022.
Post Views: 2