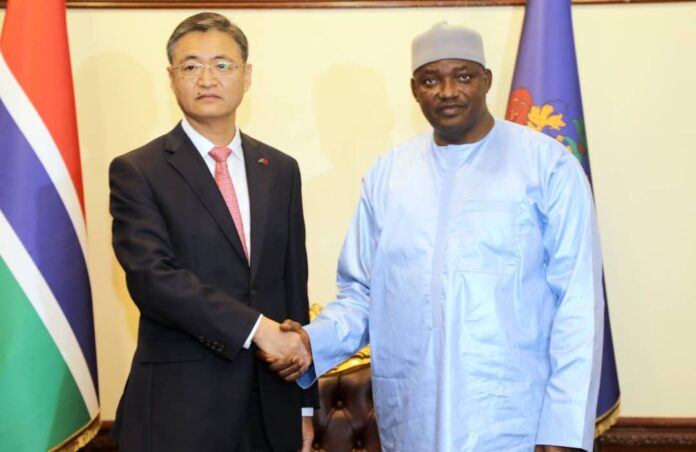 Banjul, 11th November 2022: President Adama Barrow received the Letters of Credence of the new Chinese Ambassador to the Gambia, H.E Liu Jin, on Thursday, 10th November 2022, in a colourful ceremony at the State House in Banjul. After inspecting the Military Guard of Honour, H.E Jin proceeded to the diplomatic lounge to present his credentials to the Head of State. President Barrow congratulated H.E Jin, who is the third Chinese Ambassador since assuming office in 2017, and assured him of his government’s support during his tenure in The Gambia. The President referenced the existing excellent relations with the People’s Republic of China through the new Ambassador’s predecessors, leading to unprecedented infrastructural development and technical support. He stated, “China’s support of social projects impacted positively on the lives of our people.”

The Gambian leader urged Ambassador Jin to take the relationship to a higher height, especially in the areas of rice production, and technical support, amongst others.

In addition, President Barrow used the occasion to extend his congratulations to the Chinese President, His Excellency Xi Jinping, on his recent historic re-election to a third term as China’s leader. He assured the new Ambassador of his government’s support of the One-China Policy, highlighting the cordial relations the People’s Republic of China has built with third-world countries.

For his part, Ambassador Jin said he is honoured to promote a bilateral relationship with The Gambia, which is based on mutual trust, respect, and support. ‘’Our two countries are friends and reliable partners,’’ he noted. While commending The Gambia’s commitment to the One-China Policy, he expressed optimism that the relations will be strengthened to higher heights. Th