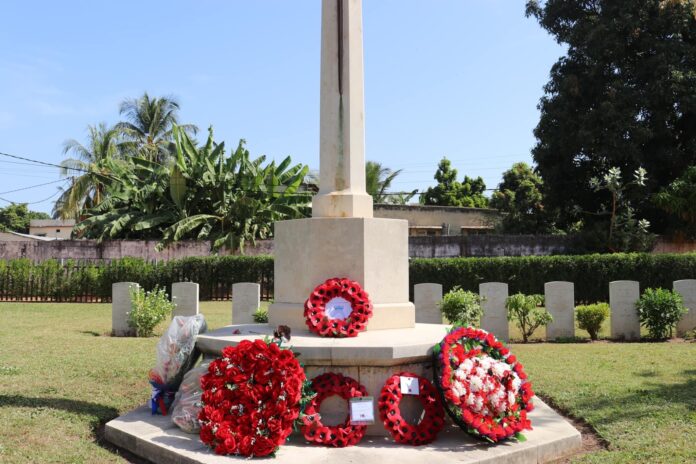 Today, the British High Commission,The Gambia legion, Minister of Defence, members of the public together with family members of war veterans joined the rest of the world in an act of remembrance.
Each year, a memorial service is held to remember and honour all those who paid the ultimate sacrifice, defending democracy and freedom. During his speech, HC David Belgrove said “Gambian soldiers fought bravely alongside British and Allied soldiers in both World Wars. Of particular note is the battle of Mowdok, in Burma, where the 1st Battalion The Gambian Regiment was honoured. The bravery of those soldiers – all of whom were volunteers, is remembered with pride, together with that of the Forces of other Commonwealth countries.
That close relationship continues to this day, with UK and Gambian armed forces training together for peacekeeping and stabilisation operations.”

High Commissioner Belgrove thanked all those who sacrificed their lives to defend our freedom & democracy. “ I should like to take this opportunity to honour all of those who risk their lives in the name of peace and freedom, especially the uniformed personnel here today. we remember the sacrifices of all those who suffer in the defence of freedom and democracy: the medical workers on the front lines; the parents who watch their children fight things from which they cannot protect them; the children too young to understand why a parent is not coming home; young people sent to war before they have reached adulthood; children who have had to grow up too soon.”

After a two minute silence, the High Commissioner, Minister of Defence, other security chiefs and members of the general public lay down wreaths as a token of remembrance for the fallen heroes.