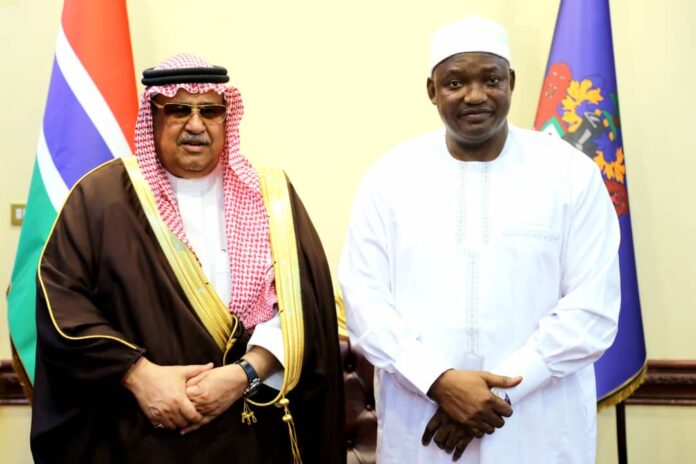 Banjul, 22nd November 2022: President Barrow has commended the friendly relations between the Kingdom of Saudi Arabia and the Republic of The Gambia during an audience with the Saudi Intelligence Chief, Khalid Ali Al-Humaidan, at Statehouse on November 21st, 2022.

The Gambian leader thanked the delegation, saying the visit would strengthen the partnership between the two countries. The President also expressed his appreciation to the Saudi Government for the support they continue to provide to the country. He added that the bilateral relationship was built on mutual trust and respect for the benefit of their people, calling for further diplomatic steps to enhance people-to-people connection.

Speaking on building on The Gambia’s international portfolio, President Barrow cited hosting the Africa Inter-faith Conference in The Gambia as further improving the country’s positive image as a peaceful place where all good investors are welcomed. He seized the opportunity to extend his gratitude to the Custodian of the Two Holy Mosques, King Salman bin Abdulaziz Al Saud and the Crown Prince, Mohammed bin Salman Al Saud.

The Saudi delegation was in The Gambia to attend a Regional Meeting of Intelligence Chiefs from 10 countries hosted by the Gambia’s State Intelligence Services.