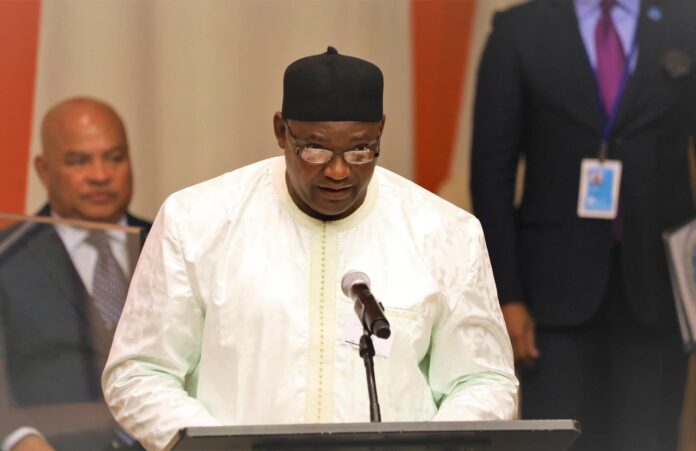 President Barrow received a briefing on a Report on a Survey of Potential Rice Cultivation Sites, and the Acquisition of land for investments at his office on Wednesday, 28th September 2022.  The presentation was in line with his Government’s drive to enhance productivity and food security, and opportunities for job creation for Gambians.

President Barrow expressed appreciation of the update and advised the Taskforce to expand the survey to a national scale that will provide bankable data for future and potential investors.  He urged the working group to also work on a standard template to harmonise the leasing of land for investment purposes as well as ensure the legal acquisition of landed property.

Following the presentations by Gambian Businessman and CEO of the Q Group, Mr. Muhammed Jah and his team, and CEO of GIEPA, Mr. Ousianou Senghore, a discussion followed with Government Technocrats and Officials from the Ministries of Lands, Agriculture, and Trade, as well as the Chief of Staff, Office of the President, Mr. Mod Ceesay.

The discussions led by the Minister of Lands, Honourable Abba Sanyang, centered on the processes for acquisition and allocation of land for agri-business, potential land for investment purposes in areas of agriculture, as well as industrial development.

Rice production was one of the priority areas President Barrow discussed with the Korean Ambassador to The Gambia, H.E. Kim Ji-Joon, when he presented his Letter of Credence to the President earlier in June. The President was pleased to get updates on the fruitful partnership between the Q Group and the Korea International Cooperation Agency – KOICA.

Mr. Jah reported that they have already identified 1000 hectares of land for piloting, on which they will start rice production for all-year-round farming.   The identification was based on the technical advice regarding the topology, structures and access to utilities that are suitable for mechanised farming, and he is optimistic to expand it to 10,000 hectares within four years.  The goal is for the country to feed itself from locally produced rice in the shortest possible time.

On the GIEPA presentation, Mr. Senghore emphasised the need for coherence and zonal allocation of land for industries and other investments nationwide.

The Lands Ministry guided the discussion on the legal acquisition of land and updated the meeting that it is working on harmonising its land criteria systems to combat double ownership, land usage, and related challenges.