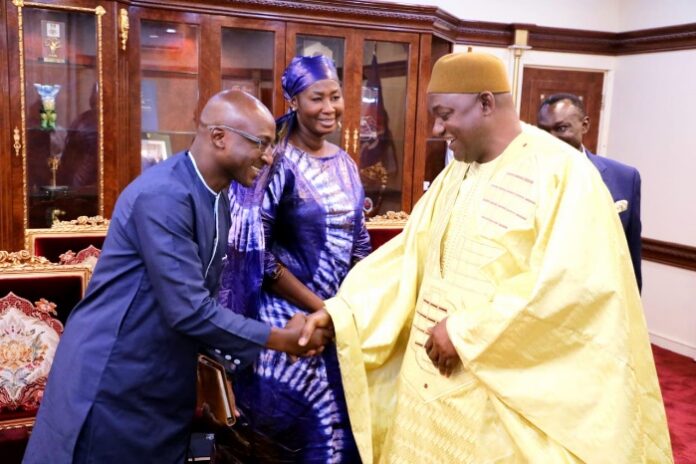 Banjul, 28th October 2022:
President Adama Barrow acknowledged the support GK Partners provides through its MSDG project, stating,” This is what we expect from Gambian Diaspora, bringing solutions to the Table,”. He emphasised that there must be leadership, however, all citizens must contribute to national development, citing Diaspora remittance as a critical contributor to the economy.

The President made the remarks when he received the senior members and partners of the Migration & Sustainable Development in the Gambia (MSDG) project on Friday, 28th October, at the Statehouse in Banjul.

The delegation, led by Professor Gibril Faal, the Project Director, went to the presidency to pay him a courtesy call and provide an update on the Project’s most recent activities. Prof. Faal noted that the MSDG project has been collaborating with the Office of the President since 2017 and that this cooperation would be strengthened with support from the Office of the Chief of Staff.

He pointed out that the MSDG’s work cuts across MDAs in the government and that the Office of the President plays a significant part in the process. Professor Faal expressed gratitude to the President for supporting the implementation of the Project throughout the years and emphasised the team’s dedication to helping him achieve his growth goals. In conclusion, he commended the government for allowing private individuals and institutions to participate in implementing projects by not putting impediments.