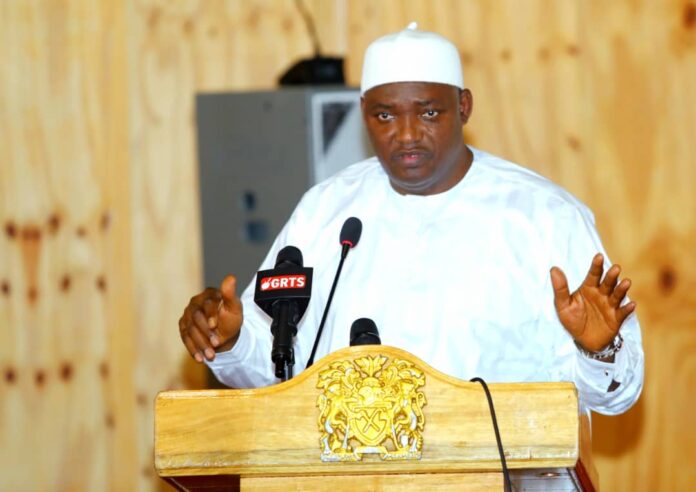 Banjul, 4th September 2022: President AdamaBarrow on Thursday, November 3rd 2022, received Chiefs from across the regions in the country. The Chiefs were at the Presidency to report on their recent visit to Guinea Bissau to pay condolences on the demise of Paramount Chief Fernandes Augustus.

Addressing the gathering, President Barrow commended the chiefs for taking the initiative to visit Guinea Bissau, describing it as a manifestation of diplomacy at its highest standard. He stated that such visits help straighten relations between countries, especially given the importance of local government in a country’s administration.

The President further noted that Gambia and Guinea have a long-standing relationship that both countries proudly cherish.

President Barrow used the opportunity to highlight his administration’s achievements in improving the lives and livelihood of all Gambians. He acknowledged the concerns about the high cost of living, which he said is a global problem that requires concerted efforts to improve. The President cited the steps his government has taken to subsidise fertilisers, fuel, and even the reduction of road tax to ease the burden on the people. Additionally, the President said he is in consultation with partners to subsidise the price of essential commodities, which is already translated in the price of oil, and rice will follow suit. He disclosed that steps had been taken to minimise rice importation by introducing a high-yield variety.

Touching on democracy, the President said some Gambians have taken it for granted to instigate people against the government but was quick to add that Gambians should be law-abiding and promote peace and harmony. He concluded that his government is doing all it can to deliver the much-needed development and is not stopping until that goal is achieved.

Speaking on behalf of the chiefs on the Bissau trip, Chief Momodou Chatty Cham of Upper Niumi expressed delight at the reception they received in Bissau. He noted that the visit had cemented the relationship between the two countries, especially at the local government level. He credited the honour accorded to them to President Barrow, whose inspirational leadership continued to transcend The Gambia’s borders.

Other Chiefs from West Coast Region, Central River Region and Lower River Region all expressed their support to the President. They pledged to work closely to alleviate the economic challenges the country is currently facing.

The Ministers of Finance, Justice, and Interior respectfully addressed the gathering on the developments at their various ministries. They expressed commitment to ensuring a stable economy, peace and security and a corruption-free Gambia.