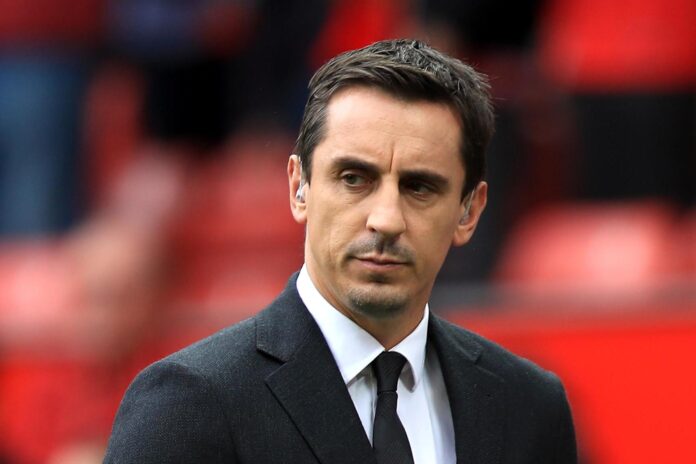 Gary Neville says Fifa president Gianni Infantino is “the terrible face” to represent the Qatar World Cup after his dubious speech on Saturday and wants the governing body to “clean up its act.”

Infantino gave an incredible hour-long speech in a pre-tournament press conference in Doha in which he declared“today I feel gay” and “I feel (like) a migrant worker” before aiming at European critics of Qatar.

Ahead of Sunday’s opening of the 2022 finals between the host nation and Ecuador, ex-England defender Neville was emerging as a pundit on belN Sports and heavily criticized the Swiss, tagging him as a “terrible face for football.”

“But he’s a terrible face for football, that guy (Infantino). Some of the things he said yesterday were inappropriate and shouldn’t be said by him. He should be statesmanlike, he should be bringing people together, he’s the global representative of football, not answering to one or two nations which he seemed to be doing yesterday. He’s got to rise above it.

“I’m sick of these leaders like (Boris) Johnson, (Donald) Trump, Infantino and (Sepp) Blatter — they don’t unite, they divide, all their language is about division, even though they think they’re bringing people together, they’re not.

“I think Fifa is a poor representation of what football is, which is a beautiful game enjoyed by communities from Brazil to Bury, from Bolivia to Peru, to everywhere. I have to say that Fifa needs to clean up its act.

“It’s been bad for so long and my personal feeling with Infantino is that he’s effectively put himself back into power for four years, there’s no independence.

“We’ve got to have independence and democracy. He elects himself back into position and I think he’s the worst face to represent the Middle East, Arabs, Muslims, and the Qatar World Cup.”

Ex-England captain Gary Lineker opened the BBC’s coverage of the World Cup by highlighting some of the problems that have been faced so far.

“It’s the most controversial World Cup in history and a ball hasn’t been kicked,” he said. “Ever since Fifa chose Qatar back in 2010, the smallest nation to have hosted football’s greatest competition has faced some big questions.

“From accusations of corruption in the bidding process to the treatment of migrant workers who built the stadiums, where many lost their lives.

“Homosexuality is illegal here, women’s rights and freedom of expression are in the spotlight, also the decision six years ago to switch the World Cup from summer to winter.

“Against that backdrop is a tournament to be played, one that will be watched and enjoyed around the world.

“Stick to football say Fifa, well, we will for a couple of minutes at least.”