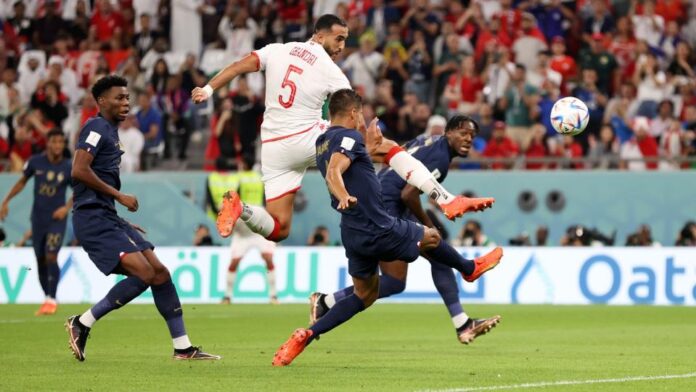 Tunisia beat holders France 1-0 on Wednesday at the World Cup, but it wasn’t enough to get them into the last 16. French-born WAHBI KHAZRI scored the only goal of the game. Didier Deschamps, the France coach, made nine changes, but they were a shadow of their usual selves. Khazri scored in the 58th minute at Education City Stadium to punish them.

After a VAR review, Tunisia had to hold on for the victory because an Antoine Griezmann goal in the final minute was disallowed.

Khazri, who was born in Corsica and now plays for Montpellier in Ligue 1, is one of six Tunisian players who were born in France. At the U21 level, he was given a cap by France.

The victory, Tunisia’s first against European opponents at a World Cup and only their third in 18 games, will be celebrated by a large Tunisian community in France.

However, in order to have a chance of reaching the last 16 for the first time, they needed Australia to lose the other Group D game that day.

Due to the Socceroos’ 1-0 victory over Denmark, France will advance.

Australia and the world champions tied for sixth place with six points each, but France won the section on goal difference and will play the runners-up of Group C in the last 16 on Sunday.

After winning their first two games in Qatar, Les Bleus were the first team to advance to the next round, so it came as no surprise that Deschamps decided to make changes.

One of those who left was Kylian Mbappe. Eintracht Frankfurt’s Randal Kolo Muani made his international debut in front of the goal.