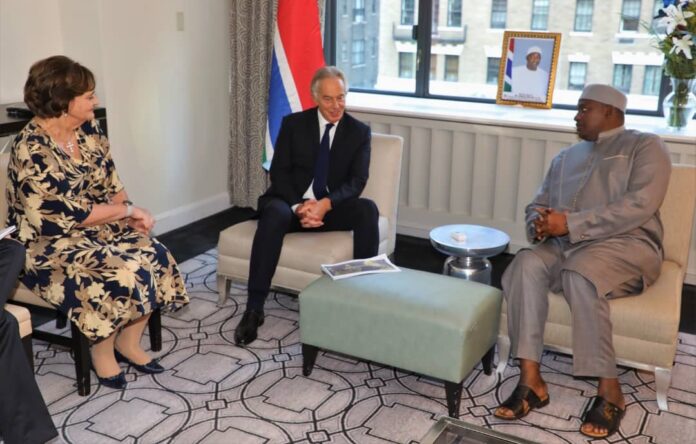 President Adama Barrow thanked the Tony Blair Institute for Global Change -TBI for the support it continues to provide to his Government since 2017. He made the remarks during an audience with the Executive Chairman and Former British Prime Minister, Mr. Tony Blair, on the sidelines of the UNGA in New York on Wednesday, 21st September 2022.

The two leaders discussed the work of the TBI in The Gambia, and Mr Blair assured the President of his Institute’s continued commitment to supporting The Gambia Government on its set priorities. They also discussed progress registered by the Department of Strategic Policy and Delivery, notably the Participatory Accelerated Community Development Programme, Office of the President.  The Programme delivered clean water and labor-saving devices and provided access to electricity in isolated communities of The Gambia to enhance lives and livelihoods. On the progress and priorities of the Government, President Barrow took advantage of the meeting to brief the Former British Prime Minister on his Government’s Institutional reform programme, digitalisation to improve e-governance, and expanding and adding value to agricultural products, among other infrastructural development plans.

The leaders also discussed developments in The Gambia and the global economy and expressed concern about its impact on people’s lives and the cost of living.    President Barrow said all efforts focus on domestic resource mobilisation to finance national development programmes. The President stated that he strongly believes in his team, saying, “with trust and

professionalism, we can achieve more than we had during the transition period.”

President Barrow received Lady Cherie Blair in New York in a separate engagement and discussed progress on the Government Assets Recovery programme. Lady Blair hopes to continue to work with The Gambia Government to support its development agenda.