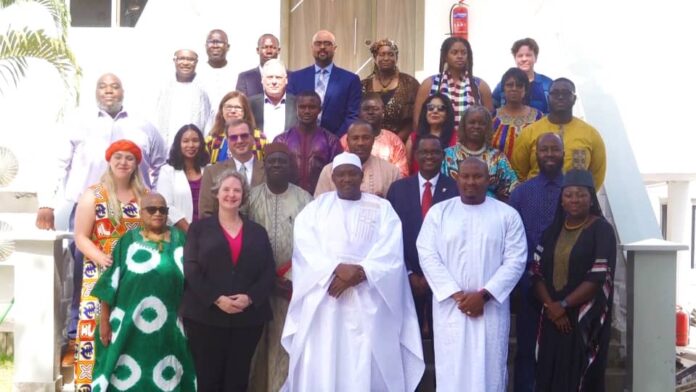 President Barrow has reechoed his call for Gambians in the diaspora to return home and support the country’s development agenda. The President spoke on December 2nd, 2022, at the statehouse during a courtesy meeting with the Mayor of Madison City, Wisconsin, Ms. Satya Rhodes-Conway.

Mayor Rhodes-Conway and her delegation were accompanied to the Presidency by Mayor Talib Bensouda of KMC. President Barrow applauded the two municipalities for working together to sustain the decade-long relationship between the two cities for the mutual benefit of its people. He cited the US-Gambia relations as key in maintaining such connections. President Barrow also said KMC’s partnership with Madison City is anchored on the ”African-American-Gambia relations to attract our diaspora brothers and sisters to return to Africa and the Gambia in particular”.

The President also stated the consideration of reactivation of the Roots Homecoming Festival to achieve this objective.

On her part, Mayor Rhodes-Conway thanked the President for the reception while pledging her organization’s continuous support to strengthen the ties of friendship between the sister cities. She described the meeting as productive in getting the President’s support and guidance for both cities to share ideas and experiences, especially given the strong presence of the Gambian community in Madison.

The Mayor of KMC, Mr. Talib Bensouda, said the relations between KMC and Madison had been fruitful over the years as KMC has garnered knowledge and inspiration from Madison city, especially in waste management. He also cited the building of the KMC library, a model of the Madison city Library. Mayor Bensouda thanked the President for his commitment to supporting the KMC-Madison sister city relation to benefit both cities.