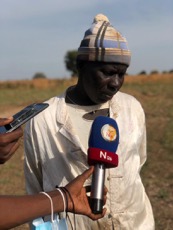 President Barrow’s groundnut price of D32,000 per ton this year has pleased groundnut farmers in the Central River Region. This year’s Meet-the-People tour had as one of its goals to talk to people in different areas about their problems and possible solutions, such as helping farmers get a better market for their farm produce.

In an interview with Malleh Sallah, a farmer from the Kerewan Samba Sirra community in the Central River Region, the farmer welcomes the D32,000 stated price per ton of groundnuts with a sad expression.He said that as a poor farmer who struggles to provide for his family, he expressed his gratitude that President Barrow, as Head of State, could purchase their groundnuts at better prices.

Sallah made the observation that, in the majority of instances, farmers face difficulties because they cannot afford to purchase fertilizer due to its high cost, which necessitates farming debt.

He also pleaded with President Barrow to take good care of them, especially the poor farmers in remote rural communities.

“If we harvest our groundnuts without customers with better prices, it’s really backward to our farming activities as we entirely depend on farming to feed our families with little local farm tools,” he said while expressing his gratitude to the Chinese for their support in purchasing their groundnuts over the years.