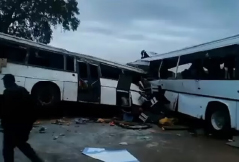 According to the president of the nation, a bus crash in central Senegal on Sunday resulted in the deaths of at least 40 people and the serious injuries of many others. “The tragic road accident that occurred today in Gniby resulted in the deaths of forty people, many of whom sustained serious injuries. In a tweet, President Macky Sall expressed his condolences to the victims’ families and wished the injured a speedy recovery.

The president announced that the nation in western Africa would observe three days of national mourning for the victims, beginning on January 9.

The crash’s cause is still unknown. The Senegalese Transport Ministry has been contacted by CNN for comment.

Sall claims that Dakar will also convene an interministerial council on January 9 to discuss “firm measures” to guarantee transport safety.