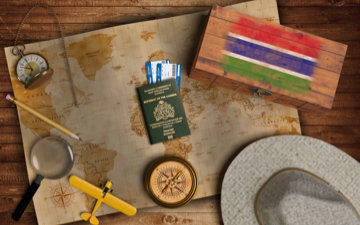 In the most recent global passport ranking, The Gambia is ranked 77 and does not require a visa to travel to 69 destinations.

The Gambia passport moved up to 77th place in this year’s Henley Passport Index infographic, which was published on Tuesday, January 10, 2023. Visa-free travel to 69 destinations remained the same as it was last year.

According to the release: “The most recent Henley Passport Index results offer revealing insight into the future and fascinating insights into a world marked by extraordinary upheaval. Japan wins the Henley Passport Index, which is based on official and exclusive data from the International Air Transport Association (IATA), for the fifth year in a row. It was the first ranking of all international passports based on the number of destinations their holders can visit without a visa. South Koreans and Singaporeans, whose nations are tied for second place on the index, enjoy a visa-free/visa-on-arrival score of 192. Surprisingly, Japanese citizens can now visit 193 destinations out of 227 worldwide without a visa. Germany and Spain share third place, allowing visa-free travel to 190 countries worldwide. With scores of 187 and 186, respectively, the United Kingdom and the United States remain in sixth and seventh place, respectively. It appears increasingly unlikely that either nation will ever regain the top spot on the index, which they shared nearly a decade ago in 2014.