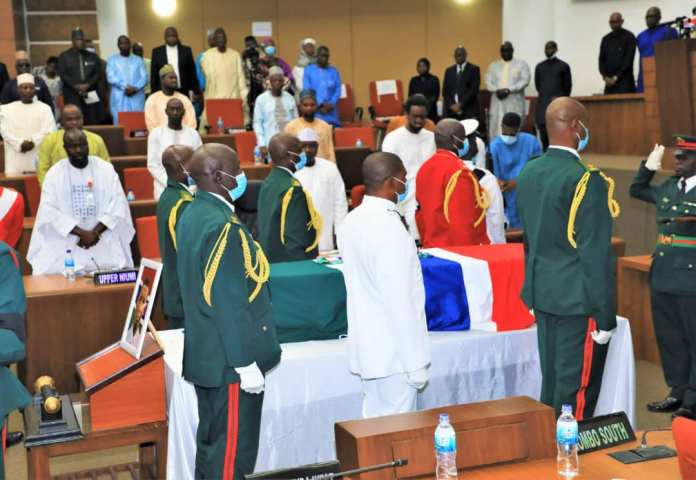 Yesterday, Vice President Badara Joof was laid to rest at Banjulinding following a moving and moving ceremony at the national assembly, where President Barrow led the tributes to the late statesman. Justice Minister Dawda Jallow broke down in tears as he talked about how he was mentored by Joof. Meanwhile, Adama Jallow’s daughter told how her father was always honest, flexible, and willing to talk to people in his family and the community.

According to Badara Joof’s neighbour and the imam of his neighbourhood mosque, he was a devoted Muslim who rarely missed gatherings at the mosque and was generous to the poor. According to him, the late vice president was also extremely humble.

On behalf of the family, Alpha A Khan, a well-known veteran educator, stated that Badara’s influence extended beyond the family.

Babou Mbye, his friend, recalled that Badara was a genuine friend who maintained his humility throughout his life, even after becoming vice president.

President Adama Barrow closed the tributes by describing Joof as a friend and brother who, thanks to his diverse character and talent, had an impact on numerous institutions he served and touched countless lives.

President Barrow made the following statement: “As the whole nation mourns, it is with a great sense of loss and a very heavy heart that I deliver this tribute in remembrance and praise of a close colleague, friend, and brother, who sadly worked as my Vice President for less than a full year when he succumbed to a brief illness.” After that, Barrow proceeded to confer the G.C.R.G. insignia on the deceased vice president, who was later laid to rest at Banjulinding.