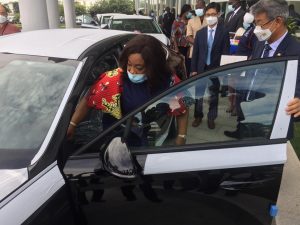 Ambassador Lang Yabou, the Permanent Secretary and Head of Diplomatic Service at the Ministry of Foreign Affairs, received the vehicles and office supplies.

While Ambassador Yabou accepted the vehicles on behalf of Minister of Foreign Affairs Dr. Mamadou Tangara, he stated that the donation would further strengthen bilateral cooperation between the governments of The Gambia and the Republic of Korea and would help alleviate transportation issues within the ministry. He assured the Ambassador that the donated materials would be utilized effectively and thanked the South Korean government for their assistance.

Conseiller Nawon KIM, a representative from the South Korean Embassy, said that the donated vehicles and other equipment will help the Ministry run smoothly. She also said that the Korean government has supported the Gambian government since 2017, and that they hope to see more collaboration between the two governments as part of their relationship with each other and international cooperation.