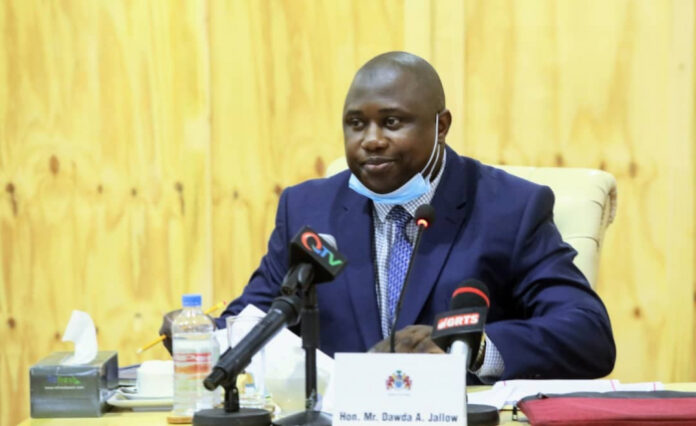 Hon. At the official funeral and tribute service for the late Ebrima Solo Sandeng, minister of justice Dawda Jallow referred to him as a man who “stood against dictatorship.” “A man whose fight for the cause in which he truly believed paid the ultimate price. He has made a lasting impression on this nation’s political history. the Minister mentioned.

In April 2016, Solo Sandeng led a peaceful protest for electoral reforms. He was detained by agents of the now-defunct National Intelligence Agency (NIA), but he died in custody.

In March of 2017, his remains were exhumed. The NIA’s director of operations, Saikou Omar Jeng, led the police to Solo’s grave in the West Coast Region’s Tanji village.

Yesterday, a funeral service was held at the Never Again Arch, which was formerly known as the July 22nd Arch.

A tribute service in his honor and a procession led by The Gambia Police Band from the Edward Francis Small Teaching Hospital Mortuary to the Never Again Arch kicked off the funeral.

This occurred following the public display of Mr. Sandeng’s coffin.

“Solo was determined to improve the lives of others. The Justice Minister stated, “He volunteered his services to the development of the community and the nation as a whole.”

“We have attained justice for him, which is indeed heartwarming for Solo Sandeng’s family and the country.”

“We would like to reiterate that his legacy will continue to live on in the history of our democratic transition as a nation,” the group said.

According to UDP leader Ousainu Darboe, who delivered an eulogy at the service, “Six years after his martyrdom, a grateful nation joins his family today not only to mourn his tragic loss, pray for his soul to rest in eternal peace, and Allah grant him Jannatul Firdaus,” but also to celebrate his well-lived life.

“His memory is etched into our hearts for the rest of our lives to those of us who knew Solo and worked with him in the long battle to defeat the brutal regime of Yahya Jammeh.”

“Solo was an ordinary citizen who, through selfless devotion to the principles he believed in, achieved an extraordinary outcome for our nation,”

Justice minister describes Solo as man who stood against dictatorship